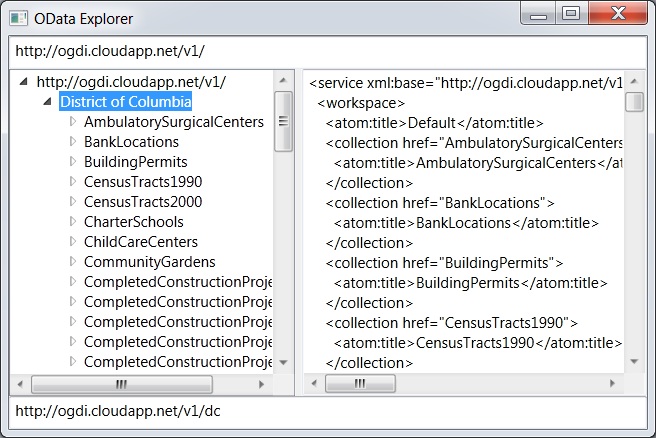 I was building a little WPF app to explore a hierarchical space (OData, if you must know), so of course, I was using the TreeView. And since I’m a big fan of data binding, of course I’ve got a hierarchical data source (basically):

I then bind to the data source (of course, you can do this in XAML, too):

What we’re trying to do here is leverage the idea of “currency” in WPF where if you share the same data context, then item controls like textboxes will bind to the “current” item as it’s changed by the list control. If this was a listview instead of a treeview, that would work great (so long as you set the IsSynchronizedWithCurrentItem property to true).

The problem, as my co-author and the-keeper-of-all-WPF-knowledge Ian Griffiths reminded me this morning, is that currency is based on a single collection, whereas a TreeView control is based on multiple collections, i.e. the one at the root and each one at sub-node, etc. So, as I change the selection on the top node, the treeview has no single collection’s current item to update (stored in an associated “view” of the data), so it doesn’t update anything. As the user navigates from row to row, the “current” item never changes and our textboxes are not updated.

So, Ian informed me of a common “hack” to solve this problem. The basic idea is to forget about the magic “current node” and explicitly bind each control to the treeview’s SelectedItem property. As it changes, regardless of which collection from whence the item came, each item control is updated, as data binding is supposed to work.

First, instead of setting the grid’s DataContext to the actual data, shared with the treeview and the textboxes, we bind it to the currently selected treeview item:

Now, because we want the treeview to in fact show our hierarchical collection of nodes, we set it’s DataContext explicitly:

Or, in other words, the textboxes effectively have a new idea of the “current” item that meshes with how the treeview works. Thanks, Ian!