This morning, I read about a $159 computer from a review on the PC Magazine site: 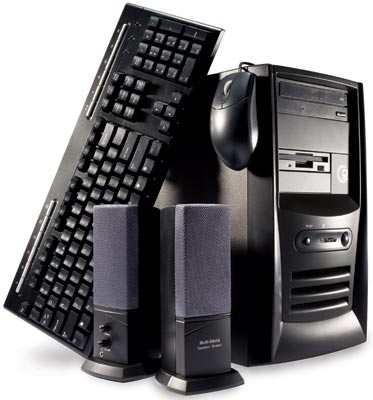 I called my local Fry’s, and while they were no longer have the $159 sale (apparently “quantities are limited”), they would be willing to sell me one for $171. While I was there, I got a 1GB memory upgrade and a 256MB ATI graphics card. Here’s the equipment I went home with:

When I got the PC, it came pre-installed with Lindows, the Linux distro meant to look and act like Windows. And I gotta say, it wasn’t too bad. Then, because they ship a free CD that runs directly w/o an install, I plugged in Ubuntu, another popular client-side Linux distro which was also surprisingly easy to use. Neither was as familiar as Windows XP, of course, but they were both a lot easier to use then the last time I ran Linux.

At 12:04am, I started the Vista Feb ’06 CTP installation. At 12:44am, I was running Vista, it having recognized all of hardware (except the sound device) from my $366 PC, including enabling those cool “glass” effects and the nifty animations, integrated search and all the neat things you’ve read about in the Vista reviews.

I know I work for “the man,” but even so, I’m seriously impressed. The install was fast and seamless. The performance is way better than I thought it would be. And the little UI tricks are fabulous. I can’t do any media stuff ’cuz my audio device wasn’t recognized, but it was cool when I tried to play video and a DVD, that the Vista Media Center UI came up (my complete home entertainment needs are served with a coupla TVs, a Media Center PC and an XBox).

I know, I know, I got the OS for free, but come on! It’s still beta and it runs great on my cheapo PC! I don’t know what Vista’s going to go for, but I bet the whole she-bang (including LCD panel and DVD drive) could be had for ~$500 when Vista ships. Plus, I’ve only been playing with it for about an hour, but I already don’t want to go back to my XP boxes…

P.S. This post was composed and posted from “visto,” my new Vista PC.