Apps Are People, Too

I concerned Wahoo! patron sent in the following screen shot of the current high scores as exposed by the high scores service: 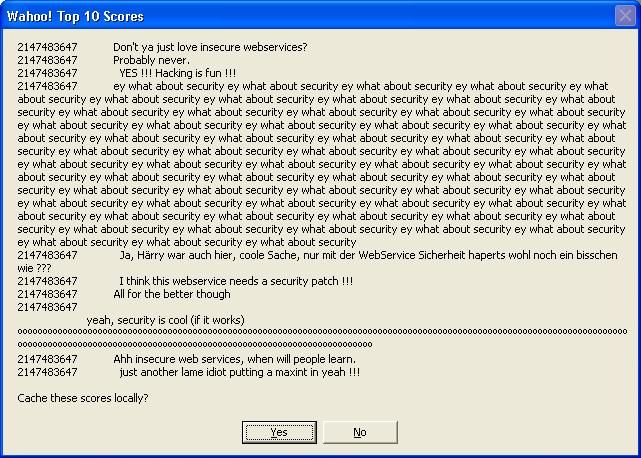 As you can see, the high scores service has turned into the poster child for the need for web service security. However, after hanging out at two Web Services DevCons and talking with Keith “Mr. Security” Brown, I’ve come to the conclusion that there is no good way to secure this specific web service. Even worse than that, there’s an entire class of web services just like it that can’t be guaranteed secure.

The goal of the high scores web service is to provide access only to the Wahoo! app itself. Only Wahoo! knows when someone has earned their score while playing instead of merely faked it through some other means. Of course, this application is just for fun, so the lack of a secure high scores repository is hardly a big deal (although I’m often surprised when people tell me that they play wahoo.exe instead of sol.exe). However, imagine that a real application wanted to do the same thing. Maybe Microsoft only wants Office applications and not Linux knock-offs to query the clip art web service on microsoft.com. Or maybe your business wants to provide a web service that only your apps can talk to.

Of course, Microsoft doesn’t ship the source code for Word and your business is unlikely to ship the source code for your apps if you plan on making money on them (remember actually making money on software?), so that’s different than Wahoo!, isn’t it? No. Every time you put code on a machine outside of your sphere of influence, you might as well ship code, especially if it’s .NET code, which comes with a built-in disassembler! “But wait,” you say. “What about code obfuscators?” Well, that arms race has already been fought in the world of Java and disassemblers won. There was no way that an obfuscator can hide the details of Java byte code without completely destroying the usability of the code (particularly in the area of performance). .NET will be no different.

“Aha! But what about unmanaged code? x86 can’t be read like IL.” You’re right. It is harder to disassemble x86 than IL, but not significantly so. The x86 disassembler tool vendors have been working for a lot longer on this problem and we’ve bred guys like Andrew Shulman and Matt Peitrek that dream in x86 and only translate to English as a convenience for their wives.

The bottom line that if you ship code, you might as well ship the source, as it’s available anyway. If a computer can execute your code, somebody can read it and pull out the details of whatever you’re using to obfuscate the communication between your code and your back end (whether it’s a web service or not).

“So why do I have to log in all the time if there’s no such thing as security?” Well, it’s not as if there aren’t ways to secure systems in the world, but all working security thus far invented depends on physical security, whether it’s the private part of a key pair secured in your safe or a password secured in your brain. The reason that applications can’t make use of this kind of security is because they don’t have access to safes and their minds can be read much more easily that those of humans (although a rubber hose is just as effective as ildasm.exe, when something is really important).

So what does that mean for applications that want to make use of back-ends? I see four solutions. One, you can tie security to a user instead of an application. For example, if I make everyone sign up for a Wahoo! account to log high scores, I’d at least know who to ban from use when they faked impossibly high scores. However, it also opens up the possibility of the user completely bypassing the application altogether, including any checks that the client may make on validity of the data being sent to the back-end.

The second possibility is to make things hard*er* on the potential hackers. Keith summed it up nicely:

“After looking at your JPG, I’d suggest some server side filtering. Limits on user name length and content would help you at least reduce the amount of space that hackers can use for advertising. OTOH, you’ve got a nice little bulletin board going there ;-)”

Anything I do in the way of encryption and obfuscation between the app and the back-end will slow down potential hackers and for something like Wahoo!, I don’t suspect it would take much to keep folks honest (turning off the asmx test page would be a good first step, for example : ).

One way to make things harder, and a third way to secure apps, is a dongle, which adds new hardware to a machine along with the software. Unfortunately, a dongle could be reverse engineered just as a hunk of software. It’s only the fairly uncommon use of dongles that keeps them from being broken more often.

The fourth option, which Keith mentioned, is Microsoft’s new Palladium platform, which operates with special hardware and software to limit a user’s access to their own computer, kind of like a universal dongle.

The real question is, what’s secure enough? Unfortunately, this is an arms race that will eventually be won by any hacker with enough smarts, time and money. For users, we continue to make things harder on hackers as we transition from passwords to biometrics and smart cards. For applications, we’ve got dongles and precious little else, which makes it darn hard to treat apps like the independent entities into which they’re evolving.