Even though Ward Cunningham and I have been living only 4 miles away from each other for some years, I really didn’t know that he lived in in the same state ’til he sold his soul hired on at Microsoft. Since then, we’ve been meeting at a local Starbucks on a regular basis to shoot the shit in a very DevelopMentor/Tektronix-like way, i.e. ramble on about whatever ’til we hit on something fun to try. In one of those meetings, we were talking about requirements for a web services API that I’m working on and he took us off on what I thought was a tangent, but turn out to be very cool.

Before Ward set me straight, I thought that Test-Driven Development (TDD) was when I built a little console app to test my APIs. I routinely do this before I write an API so that I can imagine what I wish I had to program against without being encumbered with an existing implementation. Then, I run my console app(s) afterwards for testing and regression testing, but only sporadically. I knew that NAnt let me run these tests into my build process, but since I’m a VS.NET guy and I haven’t done the NAnt/VS.NET integration work that I know I should do, I haven’t done as much with this as I knew I should be. Plus, as it was only me, it didn’t seem like such a big deal.

What makes TDD a big deal, however, is when you’ve got a team of folks. Of course, every developer is expected to check in tests for their stuff and those would be run as part of the nightly build. But that’s not the cool part. The cool part is when another developer adopts my API and puts his tests into my build process. When someone adopts an API that I build, then make certain assumptions about how it works and what side effects they can expect. TDD lets Joe R. Programmer encode his assumptions as unit test code so that when I break his assumptions during an iteration of my API, I see it as part of my compiler output. 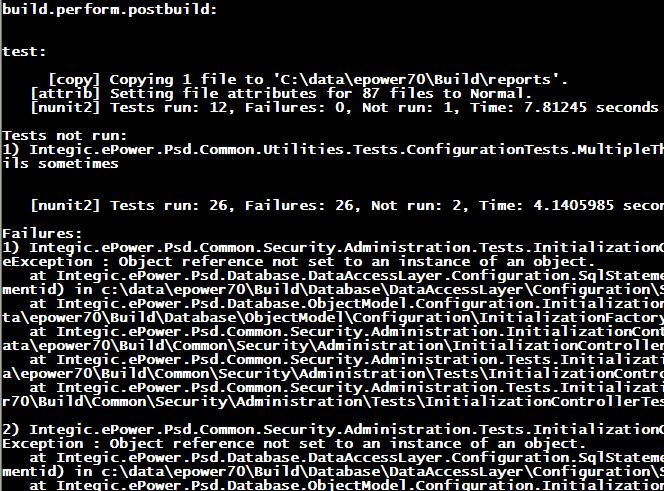 Until I get a build error, I don’t need to know or care about Joe’s test. But when I do, I look at Joe’s unit test code and decide whether he was right. If Joe’s unit test is valid, I need to either fix my breaking change or be prepared to help everyone that uses my API to rewrite and redeploy their code. If Joe’s unit test isn’t valid, I’ve got to help Joe fix his code and prepare to help everyone else that made “invalid” use of my API to begin with. The very nicest things about TDD is that “fixing breaking changes” becomes the least painful thing to do!

This is huge. In fact, it’s so huge, that MS should provide an end point for people to submit their own unit tests against our Windows and .NET APIs so that when we make breaking changes, we can either fix them or know the proportion of folks affected by this breaking change.

Anyway, when Ward told me this, my eyes were opened and I was changed. But he was just getting warmed up. After showing me the power of formal unit tests across a team, he then went on to describe the power of putting the unit tests right into specifications themselves. For example, imagine a table in a spec laying out a series of inputs and expected outputs: 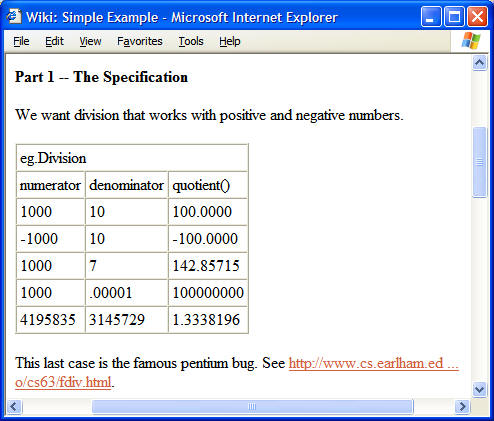 Now imagine a parser that could read through this table and execute the code being specified, checking expected output against actual output, lighting matching output green and mismatched output red: 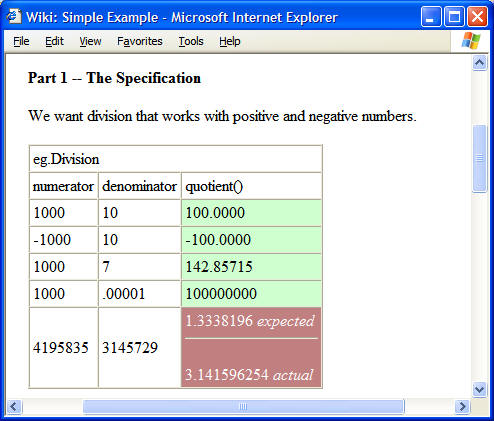 This scheme lets designers define the spec long before it’s implemented and then check it’s progress as it’s implemented. Likewise, a spec itself can be put into the build process as another set of unit tests. Plus, the readability and maintainability of specs in this format is much improved and very much more accessible then unit test code.

But wait, there’s more. This isn’t some pipe dream. Ward has a .NET implementation of it called the FIT Framework on the web and yesterday he and I played around with it in my kitchen. Our goal was to take Ward’s .NET FIT implementation and add support to it for SOAP endpoints. We started with the ISBN Information web service that we found on xmethods.org and defined the following spec:

We specified the name of the FIT “fixture” (which is the class that implements the tests in FIT), as well as the WSDL URL, the service type and method we’d like to test, the arguments we’d like to test and the results we expected to get. We mixed in some of Christian Weyer’s Dynamic Web Services Proxy and we got this: 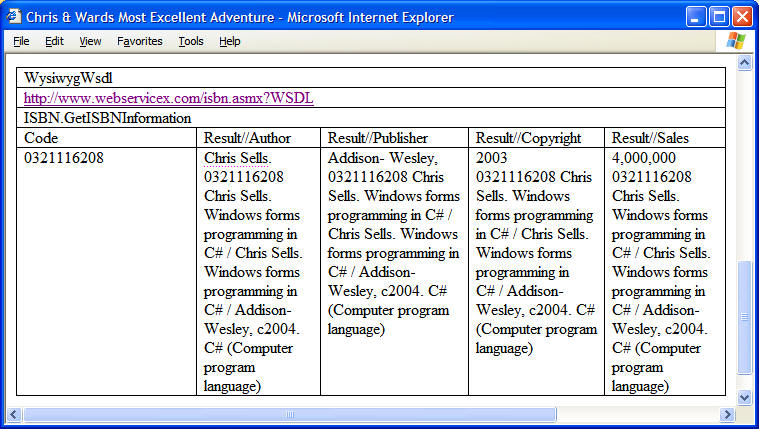 Notice that we’re not quite done yet, i.e. nothing is green and we’re not reaching into the retrieved XML and pulling out the Author, Publisher, etc. Still, while FIT requires a matching piece of code for every spec, we dropped a bit more metadata into the tables for the SOAP version, leveraged WSDL and have narrowed the project to a single piece of generic code for any WSDL-described SOAP endpoint (so long as Christian’s code can parse it).

Our plan is to finish up the extensions to FIT for SOAP and to put it into practice on the SOAP API that I’m currently designing and even to push it into our build process if I can. Further, I’d like to build another FIT fixture that, instead of executing the tests, generates sample code to demonstrate example usage and expected output (including expected errors). Rest assured, when we get it working well enough for public consumption, Ward and I will publish the SOAP extensions for your enjoyment.

But don’t wait for that! You can do TDD with custom actions in VS.NET 2003 and with the FIT Framework today!