Fun with Curl and Dart

If you’re a Dart programmer, the curl command doesn’t really help you. Oh, it can tease you with of its wonderful functionality, but you still have to take anything you can do with curl and manually translate it into Dart code.

For almost 5 years now, Nick Carneiro has maintained a wonderful site for converting curl commands into network code for your favorite language: curl.trillworks.com.

I guess his first most favorate language must be Python, since that’s the default, but since last week, there’s been a new language listed: Dart. In addition to providing this site, Nick did one other thing: he exposed the underlying tech as an OSS repo on GitHub: curlconverter. And that repo is a wonder to behold, because it was factored in such a way that I could add Dart generation support for Dart in a weekend. Truly an example for other multi-language tools to follow.

The reason you care about turning curl into Dart is because the Chrome DevTools turn the curl command format into a universal capture format for requests in Chrome. That means that you can go to your favorite web site, dig around on the Network tab of the Chrome DevTools, right-click on the bit that you like and pull it out as a curl command. 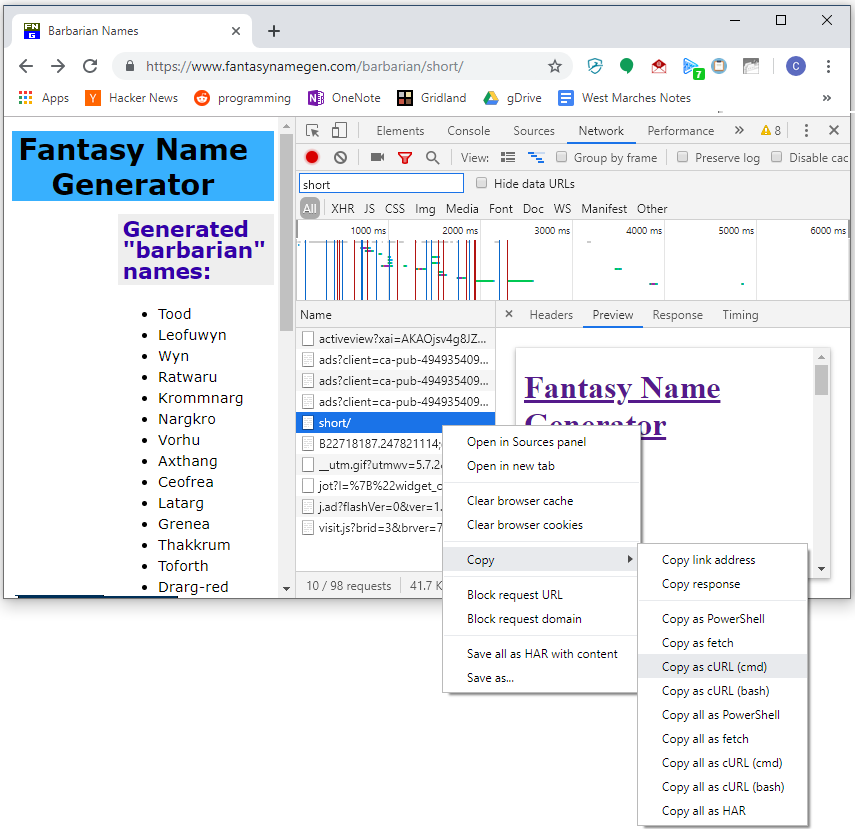 When you do, you’ll end up with something like this:

Even if you never run this as a curl command, you can still use it to generate code for your language of choice.

Pasting the curl from Chrome DevTools into Nick’s curl converter website gives you Dart code that looks like this:

This is actually a complete program and if you put it into a file, e.g. fanname.dart, you’re almost ready to run it. You also need a minimal pubspec.yaml that looks like this:

The pubspec file lists the name of your app and it’s dependencies, specifically the http package. These two files together are enough to run the program and get the same output as the curl command:

The call to pub get pulls down the dependencies and the call to dart runs your program. Of course, this assumes that you’ve got the Dart SDK installed and on the PATH. Assuming you do, you’ll have output that looks like this: 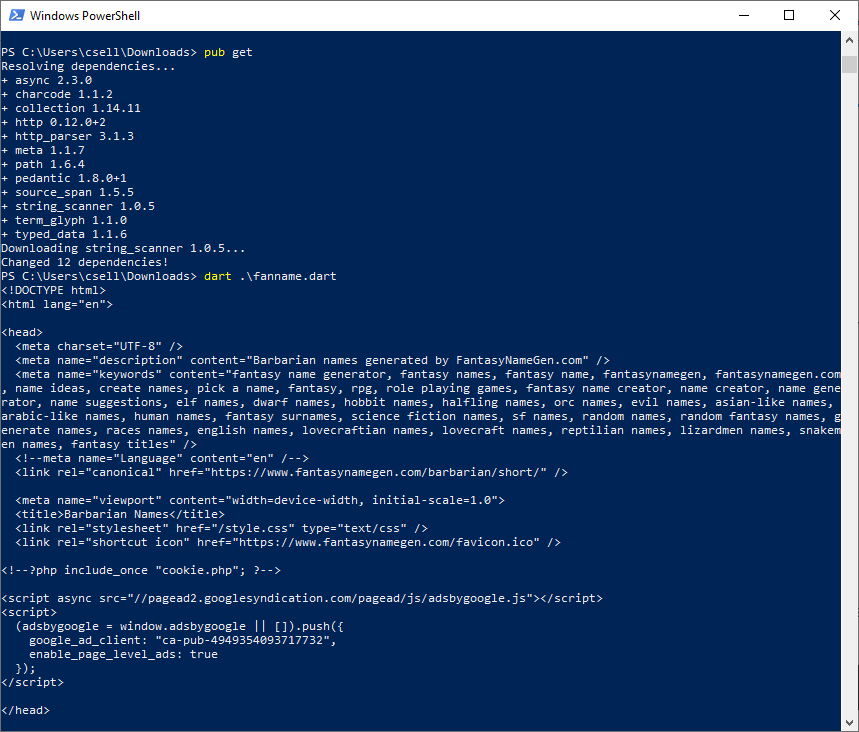 Actually, the output in this case goes on for a lot longer than that, so it isn’t particularly helpful, but with a little filtering, it can be:

If the network code you want is already being executed via curl or on the web, that means you can take that curl command and turn it into Dart code with zero effort on curl.trillworks.com. The code from that site can be executed just like a curl command immediately or used as the start of your own code.

The example I was showing in this post generated HTML, but if instead the result was JSON, then you can take that JSON output and paste it into quicktype.io to get the JSON serialization/deserialization code for Dart, too. It’s a great time to be a Dart programmer!