Eat Less and Exercise: Before and After 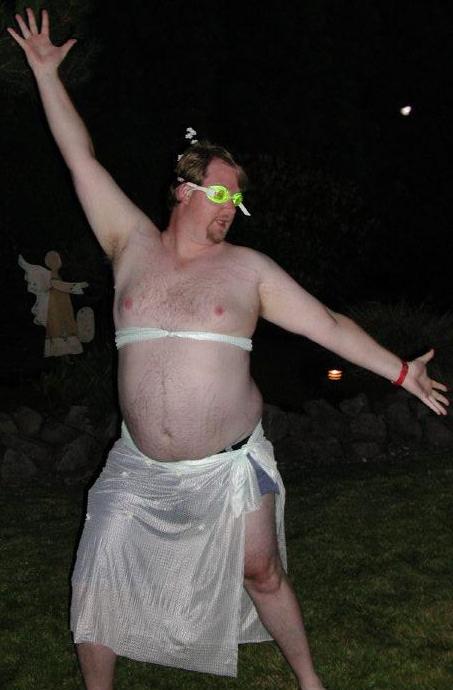 A few years ago, I looked like the “before” picture to the right. I didn’t look like that all the time, thank goodness — this was some couples’ party and I was doing the “ballerina dance” challenge — but as you can tell, I was a tad overweight. Specifically, I weighed in excess of 100 pounds more than the top end of my idea weight range, which put me over 300 pounds.

I had been a skinny kid with a fast metabolism growing up. At 6′5″ it takes a lot of food to get to full grown, even when I had only a medium build (I can’t even claim to be “big boned”). In college, living in a fraternity served by a cook that believed fully in the benefits of meat and potatoes and having been born in the Midwest with a gravy ladle in my mouth, I got my “freshman 15″ in the first semester and kept on going until I was the jolly fellow you see to your right (complete with the belly that shook like a bowl full of jelly).

I tried dieting. A few years ago, I was able to lose 50 pounds on The Geek Diet (it was a freely downloadable PDF file at the time), but gained it all back in a year. The problem was that that diet is fundamentally based on deprivation: you count calories and don’t eat more than a certain amount based on your activity level. This made me hungry and crabby all the time. Then, one Christmas back in Fargo under the influence of my deep-fried meat, brownie, cinnamon roll and fudge pushing grandmother, I snapped. It was like a psychological rubber band, pulling me right back into my old habits. Also, I didn’t exercise, so I’d plateau’d and my metabolism wasn’t equipped to deal with even a few extra calories.

Over the last twelve months, I tried something different and as of a coupla week ago, I look like the guy on the left. I called it “eat right and exercise.” It sounds revolutionary, I know, but I’ve lost 60 pounds over the last year and I’ve kept it off (even after the visit to my grandfather over the holidays!) The idea isn’t to diet at all, but to change your habits. I can’t say that I’m expert enough to recommend any of this to you, but here’s what I did:

Stop Eating When You’re Full. This was the hardest one to learn. In college, I learned up to drink and, most importantly, when to notice when it’s time to stop drinking. However, it took me ’til I was 38 to learn how to tell when I was full. This involves eating slowly and being very ready to leave food on your plate (which I always try to do now).

There’s Always More Later. This is the other key to stopping eating. As much as I might like something and want to finish it, I had to realize that there would always be more of whatever it was later. I learned to feel good about leaving food uneaten, no matter how good it was.

Eat Better Food. If you have to choose between eating 1000 calories of Doritos or of broccoli, I think we all know the right choice to make. The key is, making it. I’ve had to learn to like salad, fruits and vegetables, which I’m still working on. I’m always trying new things to learn to eat things that are better for me.

Don’t Buy Grazing Food. If I’m doing something I don’t like or am bored or reading or watching TV or any number of other things, I can easily eat chocolate or chips or any other manner of things that are bad for me, even if I’m not hungry. I have a hard time saying “no” to an unhealthy snack when I’m watching a movie, for example, so I don’t buy them. Instead. I buy apples and applesauce and melons and other things that are good for me so that if I have to snack, there are only good things available.

Eat Lots of Meals. This one is counter-intuitive, but I find I do better if I eat a small amount every few hours than larger meals three times a day. In general, if I’m hungry, I eat and if I’m full, I stop. It’s really just that easy.

Don’t Deprive Yourself. If you want a piece of chocolate or a chip or whatever it is that you crave, then have it. Life is short and there is a variety of wonderful things to enjoy. Don’t gorge yourself — everything in motivation — but don’t make yourself crazy, either. I find it makes me feel good to eat a piece or two of my grandmother’s famous fudge and it feels equally good to stop eating it.

Exercise Regularly. This is one of my major failings with The Geek Diet. I was depriving myself of calories, but I wasn’t boosting my metabolism, so my body was just adapting to fewer and fewer calories. These days, I try to swim 2 miles/week and that seems to keep me at my fighting weight.

Mix It Up. I find I’m happiest eating a bunch of small portions than one or two large portions at a meal. I like variety, so I like a little bit of a few things. Also, to make sure that my body doesn’t get used to my level of exercise (it’s getting easier and easier to swim for distance), I try a variety of exercises. For example, I just did a 90 minute hot yoga class the other day (I thought I was gonna die) and I regularly do sprints in the pool, going as fast as I can. The latter’s useful because it always sucks, no matter how fit I get, so it’s almost more than I can handle.

Commit. The key to making anything happen is to decide it’s going to happen and then route around obstacles until it does. The days I swim without resting or swim a mile when I normally go half are the days I decide to do so. The key to weight loss or any other accomplishment is first to commit.

Don’t Beat Yourself Up. Didn’t do as much exercise as you wanted this week? Had a few too many Twinkies? So what. You’re human. Let it go. Don’t give up. Do better today.

The whole point of all this is that it’s not about a temporary diet, but about changing my habits permanently. I still have 40 pounds I’d like to lose, but I don’t obsess about it. In fact, I haven’t weighed myself in months. And even if I never do lose those pounds, I’m down from a 44 waist on my pants to a 38. If I do nothing but stay there, I’ll be happy as hell with myself.

I love that most of these tips are just like Scott’s newsflash — gives me some validation. Do you have tips to contribute? Tell me about them.